The integrated beverage lines at the Coca-Cola FEMSA plant in Villahermosa, Mexico, are a perfect example of streamlined, sustainable production. Manufactured on site, the PET bottles are filled immediately after blowing, then labeled, capped, palletized, and shrink-wrapped for shipment, never touching a carton. Without bottle inventory on hand, the lines must be up and running around the clock to fulfill production targets, according to Helmut Hoedl, Head of ALPLA’s 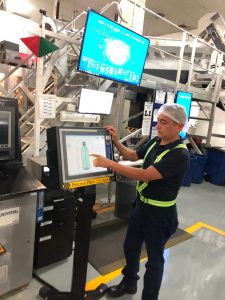 Two of the Process Pilots are installed inside KHS InnoPET Blomax stretch blow molding machines, one a Series III and the other a Series IV.  The lines are set up in a blocked configuration, which combines both blowing and filling in one compact machine. The blocked design is the linchpin of FEMSA’s strategy for streamlined operations, but it also makes the blowmolding process especially critical. Non-conforming bottles not only disrupt the line and generate product waste, but can also present performance issues, either during transport or on the retail shelf.

Even with ALPLA’s 65 years as a leader in plastics processing, including three decades of experience in on-premises packaging, Villahermosa’s especially hot and humid climate, with almost-hourly variations in ambient conditions, posed unique challenges for the converter. The environmental instability made it difficult to produce bottles with consistent material distribution and performance characteristics. 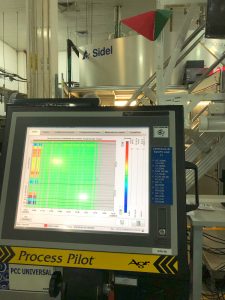 d Light, Fresca, and Sprite, the KHS lines produce multiple bottle shapes and sizes, several per machine. In response to fluctuating temperatures and humidity levels, ALPLA developed several different blowmolder settings, or recipes, for each bottle type. The ALPLA-manufactured preforms, made from up to 50% rPET, known for its variations in resin, required further machine adjustments, along with labor-intensive bottle testing.

Despite these time-consuming corrective measures, out-of-spec resin distribution across the bottle sidewall continued. This was concerning, because PET bottles that don’t meet wall thickness specifications are subject to environmental stress cracking, particularly around the base. Stress cracks can open up while the filled bottles are in storage, in transit, or in the store, leading to undesirable consequences like leaks or bursts.

Hoedl and his FEMSA colleagues realized that finer process control was essential to meet the stringent bottle specifications for the market. In search of a remedy, they found that Agr’s Process Pilot automated control system presented a means to manage the blowmolding process to a level of precision not available through any other technology. “There wasn’t really any other solution for bottle quality and better controls,” Hoedl comments.

The Process Pilot’s powerful combination of measurement and control technology manages thickness distribution and automates blowmolder response to any variable, whether a change in humidity or preform composition. It ties into blowmolder control functions associated with oven lamps, pre-blow pressure and start time, and preform set-point. The system’s proprietary learning function teaches it how modifications to basic machine control parameters affect material distribution. Once a bottle process is set for the desired thickness and performance characteristics, Pilot takes control.  Algorithms instantaneously analyze the thickness measurements over the entire container sidewall and automatically adjust the blowmolder control parameters. When even minute shifts in material distribution are detected, Pilot fine-tunes the related blowmolder function to redirect resin placement, assuring robust production of in-spec bottles without the need for operator intervention.

ALPLA installed Process Pilot systems in the two KHS blowmolders, and another in a standalone Sidel SBO 20 machine designated primarily for Ciel brand water packaged in 100% rPET bottles. The installation coincided with plant upgrades like air conditioning and air quality tests to screen for particles that might affect the blowing process.

After just a few months of operation, Process Pilot data confirmed dramatic improvement in the consistency of resin distribution in the container base. Hoedl estimates that stress cracking has declined by as much as 80 percent.

Other metrics are equally impressive. Instead of having three or four recipes for each bottle shape, ALPLA now has just one. “A 75 percent reduction in the number of recipes is important, because the more recipes you have, the greater the chance of error,” he notes, explaining, “The wrong recipe delays start-up of the filling line.”

The converter has also experienced a significant decrease in the need for operator involvement. Prior to the Pilot installation, ALPLA had documented that operators had to make as many as 240 process adjustments per day. Three months after deployment, the number of adjustments plummeted to a record of 15 in one day. On average, Hoedl figures that for every 10 adjustments made in the past, only one is needed today.

A study of all the variables that can affect bottle performance—from resin quality and the weather to warehouse conditions and bumpy roads during transport—coupled with two years of data generated by the Agr systems, has not revealed a single underlying cause of the stress cracking, but the totality of measures taken by ALPLA have delivered the right results.

“There are many influences,” says Hoedl. “We can’t point a finger at any one thing. What we do know is that if we control wall thickness distribution with the Process Pilot, our chances of having a big problem are low.”